Published each month, this report aggregates and analyzes data on 475 public plans’ reported fund commitments, as well as the news and documents of most interest to users of the eVestment Private Markets platform across Private Equity, Private Debt, Real Estate and Real Assets.

Private markets firms can use this information to gain insight into the fund strategies most popular with investors, the most active plans and consultants and the latest fundraising activity of their peers.

In March 2021, twenty-seven pension plans reported a total of $9.5 billion in commitments to Private Equity funds. The March figure surpassed the combined totals of January and February 2021 and brought total reported pension plan commitments in 1Q 2021 to $17.8 billion, a 12.3% increase from 1Q 2020.

The average commitment size in March was $102 million with a total of 93 commitments reported.

As of March 31, 2021, 126 public plans were under allocated against their Private Equity target allocations, representing $39.5 billion of potential commitments available for fund managers.

In March, CalPERS reported $4.3 billion in commitments to Private Equity funds. Commitments of $600 million flowed to Thoma Bravo and The Carlyle Group respectively while three managers, AlpInvest, Nordic Capital, and Trans-Canada Capital, each received commitments of $500 million. Interestingly, seven of the 17 reported commitments from CalPERS went to co-investment or sidecar vehicles.

South Carolina Retirement System’s Consolidated Annual Investment Plan and Statement of Investment Objectives and Polices was the most viewed Private Equity document in March. The 48-page document outlines the investment & performance objectives, policies, and guidelines for the pension system. Among the strategic initiatives for the program is one focused on designing and implementing a plan to incorporate secondaries into South Carolina Retirement System’s private markets portfolio. Another takeaway from the document is that the pension system uses Burgiss for Private Equity benchmarking.

Another popular document in the month was consultant Aon’s presentation on co-investments for their client Nebraska Investment Council. Aon highlights ‘cost effectiveness’ and ‘high conviction’ as benefits of co-investments but notes ‘concentration risk’ and ‘short time for investment decisions’ as considerations. The document is a useful guide on how managers should pitch their co-investment opportunities to Aon clients because it elucidates the points that matter most to the consultant.

An update from HarbourVest Partners for Vermont Pension Investment Committee (VPIC), was the most popular fund manager presentation with Market Lens users in March. The deck offered detailed insights on HarbourVest’s HIPEP fund-of-funds strategy, which focuses on Europe and Asia Pacific. HarbourVest is currently fundraising for their $1.25 billion HIPEP IX fund. As of September 30, 2020, VPIC has committed $495 million to HarbourVest funds including the last two vintages of the HIPEP strategy.

The average commitment size in March was $171 million with a total of 32 commitments reported.

As of March 31, 2021, 50 public plans were under allocated against their Private Debt target allocations, representing $11.8 billion of potential commitments available for fund managers.

As in Private Equity, CalPERS was responsible for much of the Private Debt activity reported in March. The California pension plan reported $2.6 billion in commitments to three managers: Ares, Goldman Sachs, and Sixth Street. The commitment to Goldman Sachs, which totaled $1 billion, went to the fund manager’s West Street Strategic Solutions Fund (a strategy highlighted in a previous edition of the Monthly Monitor) and an associated co-investment vehicle.

In addition to CalPERS, Sixth Street also received reported commitments from CalSTRS and State of Michigan Retirement Systems. The trio reported $850 million in combined commitments to the fund manager but interestingly each committed to a different strategy.

In terms of number of commitments, Iowa PERS was the most active allocator to Private Debt in March with five totaling $800 million. According to the investment memorandum, the pension plan’s commitments to Marathon and Crestline for $250 million respectively filled multi-strategy opportunistic credit mandates while those to Ares and Audax for $100 million respectively addressed mezzanine opportunistic credit mandates. Additionally, the plan committed a further $100 million to an existing SMA credit strategy managed by KKR.

March’s most viewed Private Debt document was an update on Texas ERS’ opportunistic credit program. The document offers a market review and outlines the pension plan’s proposed tactical plan for fiscal year 2022. According to the document, “ERS expects to target 0-3 investments in this portfolio in the next 12 months. Allocations would total $300million, or approximately 1% of the Trust’s assets measured as of December 31, 2020.” The document notes that Albourne Partners is the pension plan’s consultant and that they will work to identify and evaluate opportunities for Texas ERS.

Also popular in March was a document outlining consultant Wilshire’s Private Debt manager hiring recommendations for their client Iowa PERS. In September 2020, the pension plan moved to increase their Private Debt target allocation from 3% to 8%. Iowa PERS’ current allocation is heavy tilted towards direct lending strategies, so the document focuses exclusively on opportunistic credit strategies. Wilshire offers a detailed analysis on each of the four fund managers with whom Iowa PERS made new commitments, as outlined in the Top Funds & Activities section.

Crestline Investors’ presentation on direct lending for Alaska Retirement was the most viewed Private Debt pitch deck in the month. The presentation, which covers the current market opportunities for direct lending and introduces the fund manager’s Crestline Specialty Lending Fund III, was presented on March 18, 2021, and made available in Market Lens a day prior on March 17, 2021.

In March 2021, nineteen pension plans reported a total of $2.7 billion in commitments to Real Estate funds. For the quarter, reported commitments to the asset class totaled $5.7 billion, a 5% decrease from 1Q 2020. That said, the quarterly total is consistent with the activity seen in Real Estate over the previous two quarters.

As of March 31, 2021, 151 public plans were under allocated against their Real Estate target allocations, representing $33.3 billion of potential commitments available for fund managers.

Wisconsin Investment Board was the most active allocator to Real Estate in March with four reported commitments totaling $500 million. The pension plan allocated $150 million to Blue Moon Capital and Hudson Advisors respectively and $100 million each to Heitman and Penwood Real Estate. As of February 28, 2021, including unfunded commitments, Real Estate represented 8.7% of Wisconsin Investment Board’s total portfolio. This figure exceeds its 8% target allocation but is still within the policy range of 5 to 11%.

The largest single commitment reported in the month was $1 billion from CalPERS to Blackstone Real Estate Debt Strategies IV. According to a recent Blackstone presentation, the strategy has had net returns of 11% since 2009 and, “no realized losses across [the] lending platform”.

Another active allocator in the month was State of Michigan Retirement Systems, reporting $100 million commitments to Kayne Anderson and Rialto respectively. According to plan documents, the Kayne Anderson commitment went to the fund manager’s Kayne Renewable Opportunities Partners fund, a vehicle specializing in renewable infrastructure with a focus on solar and wind. The pension plan also committed a reported $40 million to BentallGreenOak.

March’s most viewed Real Estate document was the Real Estate Portfolio Annual Review & 2021 Plan for Oregon PERS. Highlights from 2020 for the pension plan included $1.8 billion in new commitments, amendments to SMA agreements to facilitate fee savings, and improved due diligence and monitoring processes. In 2021, Oregon PERS is targeting 3-5 commitments with a bitesize range of $100 million to $350 million. The pension plan will, “focus on diversifying strategies and creation of high-quality core properties with sustained long-term rental growth,” and continue integrating ESG factors into the diligence process.

Another widely viewed 2021 Real Estate Strategic Plan in the month was that of consultant StepStone Group for their client Los Angeles Water & Power. As of December 31, 2020, the pension plan had a Real Estate allocation of 7%. To help reach their goal of a 10% allocation by 2024, StepStone has recommended $375 million in new commitments in 2021. In terms of strategy breakdown, the consultant suggests $100 to $175 million to core, $75 to $125 million to value & opportunistic, and $75 to $125 million to RE debt.

KKR’s presentation for KKR Real Estate Partners Americas III to San Diego City ERS was also popular with Market Lens users in March. The deck was presented on March 11, 2021 and made available in Market Lens on March 8, 2021.

In March 2021, eighteen pension plans reported a total of $1.9 billion in commitments to Real Assets funds. This brought total commitments for 1Q 2021 to $4.2 billion, more than double the quarterly mark from 1Q 2020.

The average commitment size was $72 million with a total of 27 commitments reported.

As of March 31, 2021, 109 public plans were under allocated against their Real Estate target allocations, representing $29.7 billion of potential commitments available for fund managers.

Oregon PERS was the most active allocator to Real Assets in March with $700 million in reported commitments. The largest commitment, a combined $300 million, went to Brookfield Super-Core Infrastructure Partners and a co-investment vehicle associated with Brookfield Infrastructure Fund IV. The pension plan also committed a reported $250 million to Harrison Street’s social infrastructure strategy, which works to, “[provide] healthcare and education institutions, with clean energy and sustainable buildings.”

Connecticut Retirement announced commitments to Stonepeak Infrastructure Partners and BlackRock in March. The plan’s $125 million commitment to Stonepeak IV came at the recommendation of the firm’s consultant Meketa. In their recommendation memo, Meketa notes that Stonepeak IV’s, “mid-market, value-add strategy is well-suited to exploit both dislocations and growth opportunities in focus sectors, and … rigorous  diligence  and  dedication  to downside protection” but also highlights the fund’s increased size from fund III and willingness to make opportunistic concentrated bets as key considerations.

A trend that is worth keeping an eye on is investors’ movement towards “green strategies.” Sustainability-focused and renewables strategies represented 25% of the Real Assets commitments reported in the March.

The most viewed Real Assets document in the month was BlackRock’s presentation of their Global Renewable Power (GRP) III fund for Connecticut Retirement. The deck discusses the growing opportunity for renewables as the world’s energy dependence moves from two-thirds fossil fuels to two-thirds renewables. Also noted are the substantial declines in solar costs and battery prices since 2010, with both dropping 85% according to the presentation. In terms of the fund itself, as of February 2021, GRP III has closed $3.7 billion in commitments from over 85 investors against a target size of $2.5 billion.

On February 11, 2021, consultant Callan gave a Real Assets Education presentation to City of Milwaukee ERS and the accompanying slide deck was among the most viewed Real Assets documents in March. The presentation discusses the role that Real Assets plays in a portfolio and offers in-depth profiles on real estate, infrastructure, timberland, and farmland strategies. Callan takes care to note the growing interest in infrastructure from investors. According to the consultant, “Aging infrastructure, renewable energy targets and U.S. energy discoveries,” are driving today’s increased demand for new investment. 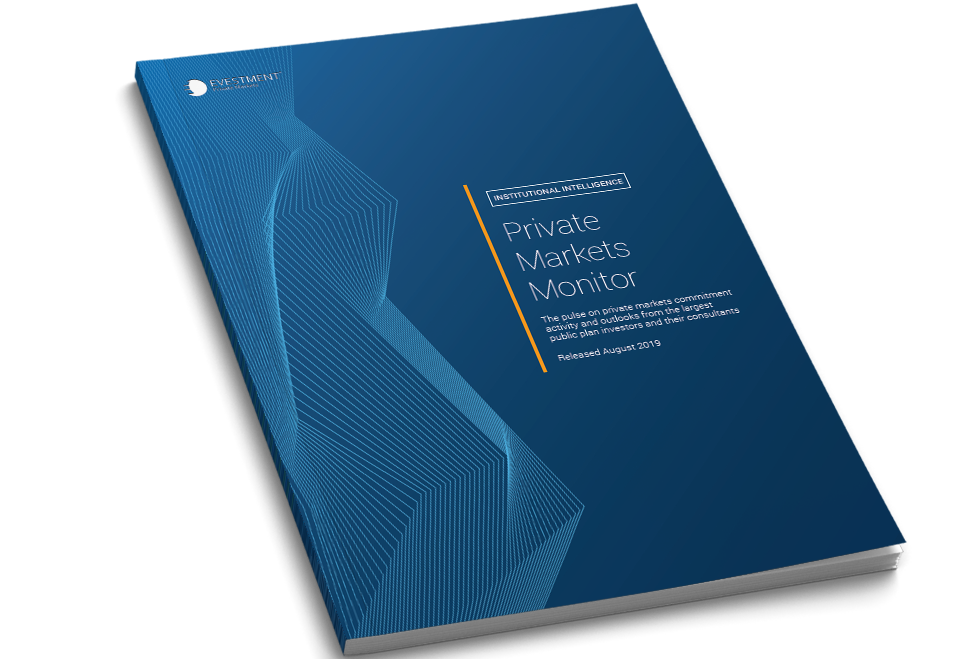